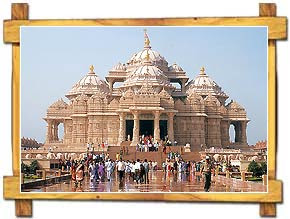 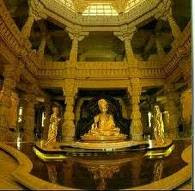 Akshardham was consecrated on 6 November 2005.The first thing that crosses one's mind or rather that should cross the mind is the name of the mandir, Akshardham. The very sound of it proposes great meaning to the plenary nomenclature. Akshardham means the eternal, divine abode of the supreme God, the abode of eternal values and virtues of Akshar as defined in the Vedas and Upanishads where divine bhakti, purity and peace forever pervades. 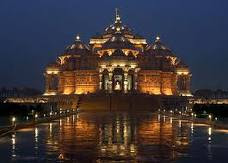 Akshardham (Gujarati: દિલ્હી અક્ષરધામ, Devnagari: दिल्ली अक्षरधाम) is a Hindu temple complex in Delhi, India.Also referred to as Delhi Akshardham or Swaminarayan Akshardham, the complex displays centuries of traditional Indian and Hindu culture, spirituality, and architecture. The building was inspired and moderated by Pramukh Swami Maharaj, the spiritual head of the Bochasanwasi Shri Akshar Purushottam Swaminarayan Sanstha, whose 3,000 volunteers helped 7,000 artisans construct Akshardham.
The temple, which attracts approximately 70 percent of all tourists who visit Delhi,was officially opened on 6 November 2005.It sits on the banks of the Yamuna adjacent to the proposed 2010 Commonwealth Games village.The monument, at the center of the complex, was built off of the Vastu Shastra and Pancharatra Shastra. The complex features a large central monument crafted entirely of stone, exhibitions on incidents from the life of Swaminarayan and the history of India, an IMAX feature, a musical fountain, and large landscaped gardens.

Experience the timeless messages of Indian culture featured through the life of Bhagwan Swaminarayan. The principle theme of sculpting one’s life for happiness, success and peace of mind is portrayed in this exhibition. The exhibits portray the messages of ahimsa, endeavor, prayer, morality, vegetarianism, family harmony, etc. through fifteen 3-D dioramas and presentations from the life of Bhagwan Swaminarayan. Exquisite settings and statues in each diorama are brought to life through robotics, fibre optics, light and sound effects, dialogues and music; transporting the audience to 18th century India. Unique 3-D dioramas and walk-through dioramas. Statues come to life through animatronic technology. A fresh experience, a new message and a novel presentation in every diorama.

A period film set 200 years back in time, it retraces the incredible journey of an 11-year old child yogi, Neelkanth. In 1792 AD, he walked for 12,000 km continuously for 7 years, barefoot and barebody, through the length and breadth of India, from the Himalayas to the southern sea-shores. Based on this inspiring true-life story and journey all over India, the film explores unique elements of India, like: Amazing and intricate art and architecture, symbolizing creativity of centuries… The real light and wisdom of India, seeking to know not how to conquer the world but how to live in peace, how to live together in harmony. The essence and message of “Mystic India” that there can be Unity in Diversity, that we are a single human family, capable of living together, loving one another. Thus, more than just a breathtaking journey, and the heroic tales of the child’s tolerance and survival, his values of faith, friendship and fearlessness, the film presents a unique journey into the mind and soul of India through the eyes of an innocent child.

A 12-minute spectacular boat-ride experience of the 10,000 year old India’s glorious heritage. Savor the world’s oldest Vedic village life and bazaar Sail through Takshashila – the world’s first university Journey through the labyrinth of ancient discoveries and inventions by the great rishi-scientists of India

The fascinating web of life on earth is intricate, precise and beautiful. Its fragile network shows an uncompromising interdependency between man, nature and God. Therefore what we receive for sustenance by way of earth, water, fire, air and space, we need to repay and sacrifice with body, mind and heart. To fulfil this function in life, India’s great sages and rishis established the yagna tradition. They chanted mantras, offered grains and ghee in a sacrificial fire (yagna kund) to appease the deities of earth, water, fire, air, etc. Yagna means to sacrifice or generously give in appreciation to others. The Yagnapurush Kund is a fascinating combination of a Vedic yagna kund and a musical fountain.

It is the world's largest yagna kund measuring 300' X 300' with 2,870 steps and 108 small shrines. In its center lies an 8-petaled lotus shaped yagna kund designed according to the Jayaakhya Samhita of the Panchratra scripture. Its perfect geometric forms testify to ancient India's advanced knowledge in mathematics and geometry. At night the center comes to life with a colorful musical water fountain that echoes the Vedic sentiments of India. Yagnapurush Kund has been so named after the founder of BAPS Swaminarayan Sanstha and the third successor of Bhagwan Swaminarayan, Swami Yagnapurushdasji (Brahmaswarup Shastriji Maharaj). 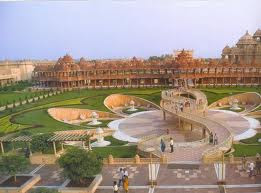 Entry Formalities - Only small female purses or male wallets allowed . Cell phones and other electronic devices are prohibited. Entry to the complex is free. But for exhibitions and light and sound show inside the complex, one has to take tickets.

Accomodation - Available at the nearby hotels and lodges in New Delhi.

Nearby Cities - Ghaziabad, Noida,Faridabad and Gurgaon.