Shahjahanbad has two Meena Bazaars- the erstwhile Shahi Meena Bazaar, build in the Chatta Chowk inside the Red Fort and the commoners' Meena Bazaar facing the eastern gate of Jama Masjid. Chatta Chowk, the long arcaded street linked with shops as you enter the Red Fort, came up a century ago, when Lord Curzon revived the old Mughal Bazaar that used to occupy the same space. And it has stayed, outlasting the many poseurs around other monuments. 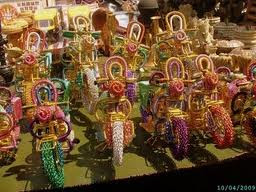 Chatta Chowk, is the street of hustlers who sorely miss the bus loads of tour groups that came through here before parking was banned in the Red Fort complex. It has seen far better days, when Shahjahan built the Shahi Meena Bazaar to serve the needs of the royal Households. Also known as Bazaar-i-Musaqqaf, meaning roofed marked, it is said to have been inspired by a similar shopping arcade in Isfahan.

The story goes that Shahjahan had heard of the Isfahan market and asked his architect, Mukarmat Khan, to replicate the design. Mukarmat Khan's effort greatly impressed the emperor, especially because of the roofed market made shopping a far more pleasant experience in the hot climate of Delhi. Bazaars in 17th Century India were mostly open-air, so a covered market was considered a novelty befitting royalty.

Shahjahanbad's other Meena Bazaar, outside jama masjid, caters primarily to the tourist from small town India. There are prayers caps, plastic Quranic inscriptions, posters of the mecca and suchlike.

Meena Bazaar is placed beyond the main entrance (Lahori Gate) of Red Fort, Mondays are closed in this market.
Meena Bazaar places to visit