Just next to the police in Nizamuddin west is a lane that graduates into Basti Hazrat Nizamuddin, formerly known as ghiyaspur, making its way around numerous local shops to the dargah of the sufi saint Hazrat Nizamuddin Ayliya.
Nizamuddin was born as Muhammad but at the age of 25, he came to delhi and settled at Ghiyaspur. He was perhaps one of the most politically well-connected spiritual leaders in early medieval india, being on extremely good terms with the Emperors Allauddin Khalji and Muhammad bin Tughlaq, both of whom ascended the throne of Delhi in an atmosphere of intense intrigue after the murder of their predecessors. 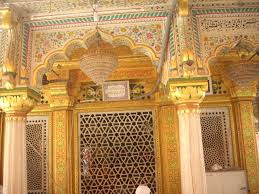 Nizamuddin also shared a deeply intimate friendship with the poet Amir Khusrao, who is buried in the same complex, as is Jahanara Begum, Daughter of the Mughal Emperor Shahjahan. The Dargah was originally built in the mid-14th century, and qulte succesfully diverted labour from the services of the EmperorGhiyasuddin Tughlaq, who was constructing Tughlaqabad at the time.
The Jamaat Khana Mosque next to the Dargah dwarfsit in sizebut not the stature. The Mosque is the first monument to have been erected in the complex. The Location of Dargah is Nizamuddin (west), timings af dargah are summer 4.30am to 10 pm and in winters are 6am to 10 pm. timings of Qawwallisare summer 9am-noon, 5.30 -10pm and that of in winter is 4-8pm 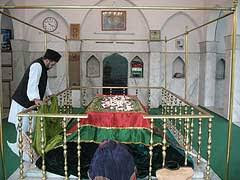 Main festival is Basant Panchmi, when marigolds are offered to Nizamuddin, istead of traditional rose. The noticeable thing is Women are allowed into the dargah, but not inside Hazrat Nizamuddin and Amir Khusrau's tombs.
Dargah in delhi Hazrat Nizamuddin Dargah