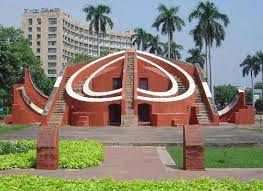 Surrounded by Delhi's commercial, political and administrative landmarks, the Jantar Mantar is an astronomical wonder dating from ,the 18th century. This observatory was masterminded by Maharaja Jai Singh IIof jaipur(1699-1743), under orders from Mughal Muhammad Shah around 1724.

Jantar Mantar built entirely of red brick and rubble, ansd is inscribed with scale markings in order to take readings. Jai Singh, it is delieved, studied all known astronomical observations of ancient times, before the designing of the Jantar Mantar, along with similar structures at Jaipur, Ujjain, Varanasi and Mathura. 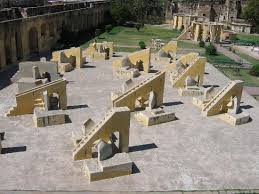 The Jantar Mantar observatory comprises six instruments, of which the largest is the Samrat Yantra. Also called the "King Of Instruments", this gigantic sundial consists of an inclined wall parallel to the earth's axis, flanked by two semi-circular quadrant. To its left is the Shasthamasa Yantra, consisting of a large graduated arc. 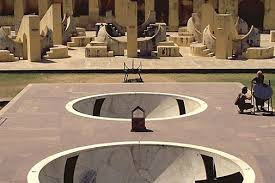 Further South is the Jai Prakash Yantra, "Light of Jai", named after Jai Singh II, which contains two concave hemisphere structures used to ascertain the positions of the Sun and other heavenly bodies. 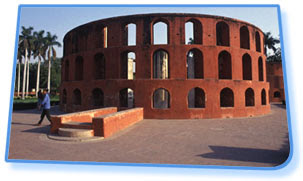 The Ram Yantra, two circular structures enclosing cylindrical pillars within, was used to study the azimuth (horizontal) and altitude (vertical) angles. The spade-shaped structure of the Misra Yantra, built by Jai Singh's son Madho Singh, is the most popular symbol of the Jantar Mantar. 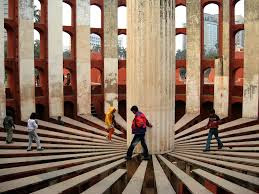