Overview map of delhi.
Delhi has a maximum length of 51.9 km (32 mi) and the maximum width of 48.48 km (30 mi). There are three local bodies (statutory towns) namely, Municipal Corporation of Delhi (area is 1,397.3 km2 or 540 sq mi), New Delhi Municipal Committee (42.7 km2 or 16 sq mi) and Delhi Cantonment Board (43 km2 or 17 sq mi). Delhi is located at 28.61 degree North 77.23 degree East, and lies in northern India. It borders the Indian states of Uttar Pradesh on East and Haryana on West, North and South. During British Raj it was a district of the Punjab province, and historically it has been part of the larger Punjab region, which stretches from Yamuna in the East to the Indus River in the West. Delhi features an atypical version of the humid subtropical climate. 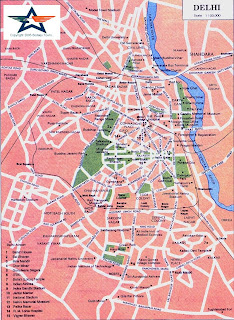 Delhi Map
Summers are long and extremely hot, from early April to mid-October, with the monsoon season in between. Early March sees a reversal in the direction of wind, from the north-western direction, to the south-western. These bring the hot waves from Rajasthan, carrying sand and are a characteristic of the Delhi summer. These are called loo. The months of March to May see a time of hot prickling heat. Monsoon arrives at the end of June, bringing some respite from the heat, but increasing humidity at the same time. The brief, mild winter starts in late November and peaks in January and is notorious for its heavy fog.

East Delhi(aka Trans Yamuna) is an administrative district of the National Capital Territory of Delhi in India. East Delhi is bounded by the Yamuna River on the west, North East Delhi to the north, Ghaziabad District of Uttar Pradeshstate to the east, andGautam Buddha Nagar District of Uttar Pradesh to the south. East Delhi has a population of 1,448,770 (2001 census), and an area of 64 km², with a population density of 22,638 persons per km². Administratively, the district is divided into three subdivisions, Gandhi Nagar, Preet Vihar, and Vivek Vihar. 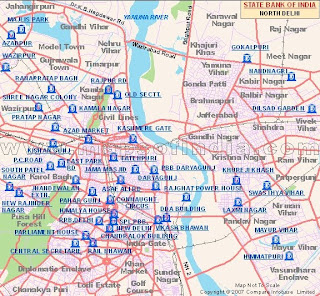 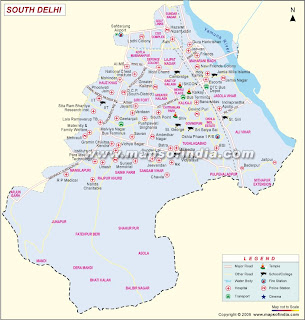 Indeed, on a broad scale Delhi is not difficult to navigate. The Outer Ring Road, and Ring Road, offer simple connections between districts. In South Delhi, most of the major districts lie on either the inner or outer ring roads.Traveling west on the Ring Road from Nizammudin, the following colonies lie in the following order, Friends Colony, Lajpat Nagar, Defence Colony, South Extention, INA, Safdarjung, Bikhaji Kama Place, RK Puram, Chankyapuri, Dhaula Kuan. And on the outer Ring Road, traveling west from Okhla, the following colonies lie in the following order,Nehru Place, Kalkaji, GK2, GK1, CR Park, PanchShil Park, Hauz Khas Enclave, Safdarjung Enclave, Munirka, Vasant Vihar. The only major areas that lie in between the Ring Roads as opposed to adjacent to them are are Anand Niketan, Hauz Khas Village, Green Park. 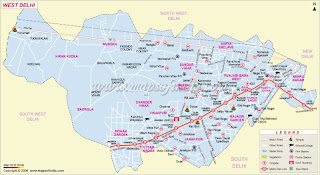 Gurgaon -Manesar Map
Gurgaon is also the only Indian city to have successfully distributed electricity connections to all its households. However, because of its heavy vehicular traffic and inefficient public transportation apart from the Delhi Metro, Gurgaon ranks 11 amongst Indian cities on the "Life after Work" index of Business Today. Gurgaon has the 3rd highest per capita income in India after Chandigarh and Mumbai.

Faridabad Map
Faridabad is now the most populated city of Haryana and it generates about 60% of the revenue of the Haryana state. 50% of the income tax collected in Haryana is from Faridabad and Gurgaon. Faridabad is famous for henna production, while tractors, motorcycles, switch gears, refrigerators, shoes and tyres are other famous industrial products of the city. For the purposes of civil administration, Faridabad District is divided into two sub divisions, viz. - Faridabad and Ballabgarh. Ballabgarh City is a major part of Faridabad , having most population. Ballabgarh have Raja Nahar Singh's Mahal. Its just 5 kilometers from Main Old Faridabad.

Noida Map
Noida, short for the New Okhla Industrial Development Authority, is an area under the management of the New Okhla Industrial Development Authority (also called NOIDA).Noida came into administrative existence on 17 April 1976 and celebrates 17 April as "Noida Day".Sanjay Gandhi set it up as part of an urbanization thrust during the controversial Emergency period (1975-1977). The city was created under the UP Industrial Area Development Act. It has first-class amenities and is considered to be one of the more modern cities of Uttar Pradesh State of India. It is also home to the Noida Film City.

Ghaziabad Map
Ghaziabad is a planned industrial city in the Indian state of Uttar Pradesh. It is 19 km east of Delhi and 46 km southwest of Meerut. The city houses the headquarters of the Ghaziabad district. It was initially part of the Meerut district after independence, till the time when — due to political intervention — Ghaziabad was separated and given a new district status.
Delhi Map Delhi(NCR) Map