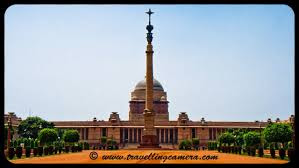 Rashtrapati Bhawan, once the home of a British Viceroy and post-Independence home of the President of India, was designed by the architects Edwin Lutyens and Herbert Baker, Lord Harding, the British Viceroy, and an entire town planning committee. It has four floors and 355 decorated rooms and a floor area of 200,000 square feet (19,000 m²). The structure includes 700 million bricks and 3.5 million cubic feet (85,000 m³) of stone, with only minimal usage of steel. 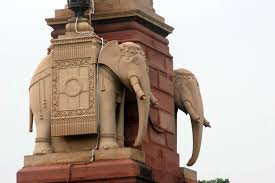 The dome combines classical and Indian styles. Lutyens said the design evolved from that of the Pantheon in Rome, while it is also possible that it was modelled after the great Stupa at Sanchi. A porch goes around the dome with evenly spaced columns which support the dome, with an open area between the columns. Because this goes the whole way round, it makes the dome appear from any angle that it is ‘floating’ as seen in the heat haze of Delhi. The reinforced concrete shell of the outer dome began to take shape near the start of 1929. The last stone of the dome was laid on April 6, 1929. 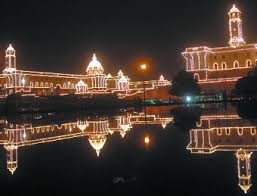 There are separate wings for the Viceroy, and another wing for guests. The Viceroy’s wing is a separate four-storey house in itself, with its own court areas within. The wing was so large that the first president of India decided not to stay there, staying in the guest wing, a tradition which was followed by subsequent presidents. At the centre of the main part of the palace, underneath the main dome, is the Durbar Hall, which was known as the Throne Room during British rule. 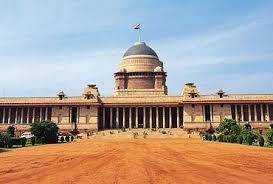 The interior of almost all the rooms of the palace are bare, relying on the stonework and shapes to show an austerity rather than intricate decoration. In the hall, the columns are made in ‘Delhi’ order which combines vertical lines with the motif of a bell. The vertical lines from the column were also used in the frieze around the room, which could not have been done with one of the traditional Greek orders of columns. The hall has a 2-ton chandelier which hangs from a 33-metre height. On each of the four corners of the hall is a room, including two state drawing rooms, a state supper room and the state library. 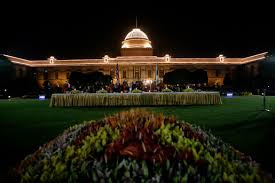 There are also other rooms such as many loggias (galleries with open air on one side) which face out into the courtyards, a large dining hall with an extremely long table, sitting rooms, billiards rooms, and a large ball room, and staircases. Water features are also through the palace, such as near the Viceroy’s stairs, which has eight marble lions spilling water into six basins. The lions symbolise Britain, as the lion was often used for this purpose. There is also an open area in one room to the sky, which lets in much of the natural light. 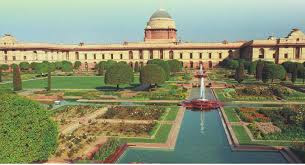 There were grilles made from red sandstone, called jalis or jaalis. These jalis were inspired by Indian design. The front of the palace, on the east side, has twelve unevenly spaced columns with the Delhi order capitals. These capitals have a fusion of acanthus leaves with the four pendant Indian bells. The Indian temple bells are a part of the culture of Indian religions. One bell is on each corner at the top of the column. It was said that as the bells were silent British rule in India would not end. The front of the palace does not have windows, except for the wings at the sides. 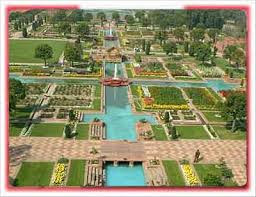 Behind the building are the Mughal Gardens spread over 250acres. The two Secretarial buildings, with their 1000-odd rooms, were bulit by Baker to sit on an elevated platformto keep pace with the rising slope of the site.
Location : Rashtrapati Bhawan, North and South Block Closed to the Public. Discussed features can be seen from Rajpath and from the Mughal Gardens.
Timings : 10am to 5pm. Sundays closed. 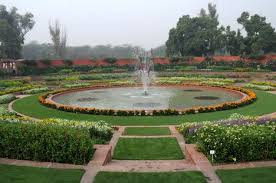 Mughal Garden open 14 February to 14 March.Visitors are allowed entry to the garden from 9.30 A.M. till 2.30 P.M. on all days except Mondays. The gardens may remain closed on other days also in case of a function in the Mughal gardens or during the visit of a VVIP during the said period. The dates are made known to the public through various media. The entry and exit into the gardens is regulated from Gate No. 35 of the President's Estate, which is located near the North Avenue, at the western end of the Church Road.
places to visit Rashtrapati Bhawan