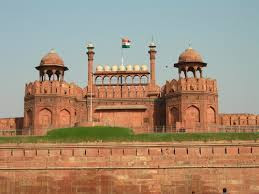 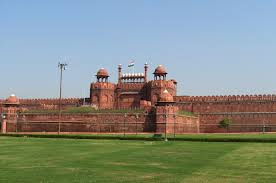 The Red Fort is one of the most popular tourist destinations in Old Delhi, attracting thousands of visitors every year. The fort is also the site from which thePrime Minister of India addresses the nation on 15 August, the day India achieved independence from the British. It also happens to be the largest monument in Old Delhi. 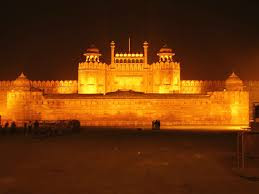 Today, a sound and light show describing Mughal history is a tourist attraction in the evenings. The general condition of the major architectural features is mixed. None of the water features, which are extensive, contain water. Some of the buildings are in fairly good condition and have their decorative elements undisturbed. In others, the marble inlay flowers have been removed by looters and vandals. The tea house, though not in its historical state, is a functioning restaurant. The mosque and hamam are closed to the public, though one can catch peeks through the glass windows or marble lattice work. Walkways are left mostly in a crumbling state. Public toilets are available at the entrance and inside the park, but some are quite unsanitary. 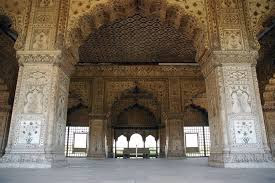 The entrance through the Lahore Gate leads to a retail mall with jewellery and crafts stores. There is a museum of "blood paintings" depicting young Indian martyrs of the 20th century along with the story of their martyrdom. There is also an archaeological museum and an Indian war memorial museum. 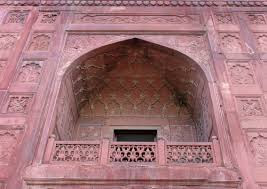 Inside the Red Fort some important buildings and other structures are also situated which shows the very high level of art form and ornamental work like.

Beyond this gate is another, larger open space, which originally served as the courtyard of the Diwan-i-Aam, the large pavilion for public imperial audiences with an ornate throne-balcony (jharokha) for the emperor. The columns were painted in gold and there was a gold and silver railing separating the throne from the public. 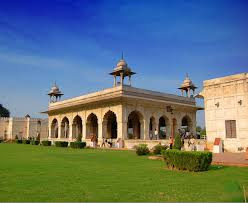 The Diwan-i-Khas is a pavilion clad completely in marble, the pillars are decorated with floral carvings and inlay work with many semi-precious stones. 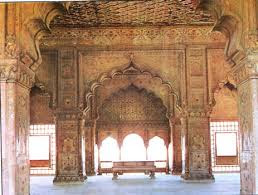 The imperial private apartments lie behind the throne. The apartments consist of a row of pavilions that sits on a raised platform along the eastern edge of the fort, looking out onto the river Yamuna. The pavilions are connected by a continuous water channel, known as the Nahr-i-Behisht, or the "Stream of Paradise", that runs through the centre of each pavilion. The water is drawn from the river Yamuna, from a tower, the Shah Burj, at the north-eastern corner of the fort. The palace is designed as an imitation of paradise as it is described in the Koran; a couplet repeatedly inscribed in the palace reads, "If there be a paradise on earth, it is here, it is here". The planning of the palace is based on Islamic prototypes, but each pavilion reveals in its architectural elements the Hindu influences typical of Mughal building. The palace complex of the Red Fort is counted among the best examples of the Mughal style.

To the west of the hammam is the Moti Masjid, the Pearl Mosque. This was a later addition, built in 1659 as a private mosque for Aurangzeb, Shah Jahan's successor. It is a small, three-domed mosque in carved white marble, with a three-arched screen which steps down to the courtyard.

To its north lies a large formal garden, the Hayat Bakhsh Bagh, or "Life-Bestowing Garden", which is cut through by two bisecting channels of water. A pavilion stands at either end of the north-south channel, and a third, built in 1842 by the last emperor, Bahadur Shah Zafar, stands at the centre of the pool where the two channels meet.

The two southernmost pavilions of the palace are zenanas, or women's quarters: the Mumtaz Mahal (now a museum), and the larger, lavish Rang Mahal, which has been famous for its gilded, decorated ceiling and marble pool, fed by the Nahr-i-Behisht. 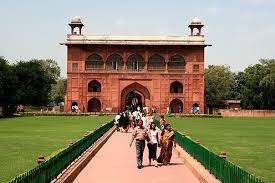