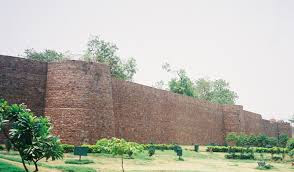 A british-built railway bridge links the Red Fort to the much older Salimgarh Fort, built by islm Shah Suri, successor of Sher Shah Suri. The bridge once spanned the Yamuna. Today, the Outer Ring Road runs below. The Fort was hardly ever used as a Fort, and remains an incomplete construction.Only the outer walls were finished by the time of Islam Shah's death, after which the fort was abondoned, A mosque within was also built by Islam Shah. 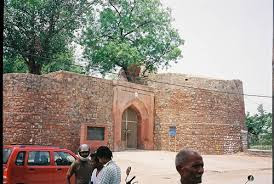 The location chosen for building the fortification was in the Delhi plains (with an elevation range of 80–110 feet (24–34 m), hemmed by the Yamuna River on one side and the northern spur of the Aravalli range of hills on the other side. This topography of the land area with the rock exposures at the Fort’s location, with a favorable link with the northeast trending ridge and Juma Masjid, was visualized as an ideal setting that provided the needed protection against erosion by the Yamuna River.
It was also obvious that a stream on one side and a mountain ridge on the other side of any fortification would be a formidable barrier for invaders to penetrate into Delhi, as such a setting would only force the invaders to follow the river course. Keeping these advantages in view the Salimgarh Fort was built in 1546. 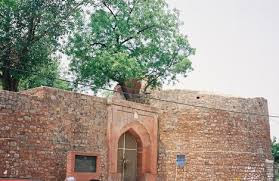 During the British rule, the Sepoy Mutiny (also called the First War of Independence (the Upraising) was put down in 1857 and the last Mughal Emperor Bahadur Shah Zafar II was taken prisoner at Humayun tomb. This fort was then the scene of lot of war activity. During the Upraising, Emperor Bahadur Shah II‘s complicity with the mutinous soldiers was obvious. He operated from this Fort. During August and early September 1857 he held meetings at the fort on war strategy.

He also watched, from the ramparts of the fort, artillery fire aimed at the British Army. He even played a psychological game with his army officers who had come in a delegation seeking salary, when he told them that he would forego some of his crown jewels for the purpose and that he would give up his life for the cause; the officers refused his offer trusting that the Emperor was stating all this in right earnest. Following this, even proclamations were issued declaring that the Emperor would lead the attack against the British and urging all his people, irrespective of caste or creed, to join him in fighting the war.

But, in the middle of September 1857, British soldiers were closing in on the Fort. At this stage, his trusted assistant Bhakt Khan urged the Emperor to leave the fort and accompany him to a safer place and look for a day when he could “renew war in the open country”. But the Emperor refused, permitted his army to vacate the fort but he himself moved to the Humayun tomb. The fourth infantry of the British army entered the Salimgarh Fort where they encountered a single sentry only. Similar experience was encountered by the Punjab Fourth infantry regiment when, earlier, they had entered the Palace from the Lahore gate of the Red Fort.
The Fort has a triangular plan and its thick walls are built in rubble masonry. It has circular bastions. From the time it was built, the fort structure has undergone several stages of repairs over the centuries. An Arch bridge links it with Red Fort on the northeastern side, which was constructed during Bahadur Shah Zafar’s reign and hence the gate is named as Bahadur Shah Gate. The gate is built of brick masonry with selective use of red sandstone. During the British rule, a railway line was constructed, after demolishing an old bridge, which divided the Salimgarh Fort and chipped part of the Red Fort, and which was then considered an uncaring action. This railway line has truncated the fort.

In the initial years, the Fort was accessed through boats only but a bridge linking the Red Fort with Salimgarh Fort was said to have been built byJahangir, father of Shahajahan;a conflicting information also attributes its construction by Farid Khan who held the fort in Jagir. This bridge was later replaced by a railway bridge at the same location. At present, an arched over bridge connects it from the Red Fort end. From this location, the fort provides a commanding view of the Red Fort, the river and the surroundings. But it is a noisy area with continuous flow of heavy traffic from the several artery roads that surround it and also from the traffic flow from the trans–Yamuna over the existing steel bridge on the main river close by. The East India Railway was brought to Delhi through the Salimgarh Fort. The line used to pass over Salimgarh and a portion of the fort. It was later extended to the Rajputana Railway.

The Swatantra Sangram Museum, which opened to the public on October 2, 1995, is located in the precincts of the Red Fort Complex within the Salimgarh Fort as it was the prison where the INA Freedom fighters were incarcerated by the British from 1945 till Independence of India from British rule on 15 August 1947. Many of the freedom fighters had died within the jail premises. The place was chosen as the site for the Museum on the basis of initial identification provided by a geriatric Colonel Gurbaksh Singh Dhillon (one of the heroes of the Indian National Army) of the location where the British had held trial of the Indian National Army freedom fighters for treason, in 1945. Since then he retracted (after the present museum was completed) his selection of the site and indicated a new building adjoining the existing museum as the site where the trial was held. Later in 2007, a section on Mahatma Gandhi was also proposed to be added to the Museum with full–size depictions of the Jallianwala Bagh firing and the Salt Satyagraha. At the Prime Minister’s intervention the premises of the fort and the Museum have been opened to the public. To encourage tourists to visit this place, ASI has also introduced guides at the Red Fort gate to give directions to this Fort, which till recently was hardly known to the public vis-à-vis the famous Red Fort. Also, the long walk from the Red Fort gate to this place discouraged people from visiting the fort and the museum.