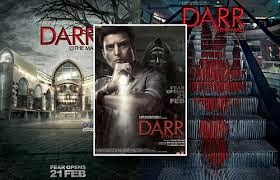 After a long time an horror movie has been directed by an Indian Director Pavan Kirpalani Named DARR @ THE MALL which is going to release today i.e. on 21st, February 2014 on Indian cinema screen. The lead roles are played by Jimmy Shergil and Nushrat Bharucha and the side roles are played by Arif Zakaria, Asif Basra, Nivedita Bhattacharya, Shradha Kaul and Neeraj Sood. The music of the movie given by Shankar- Ehsaan- Loy.

The story of the Movie revolves around a mall Indians biggest mall which is not yet inaugurated but going to be inaugurated soon. During the construction of that place many haunted activities were happened with the labors in the place was named because of which the place was labelled to be haunted. Jimmy shergil plays the role of Chief of Security of that mall. one day before the inauguration Vishnu (Jimmy Shergil) feel some haunted activities in the mall itself. for Inauguration of the mall a big industrialist was invited and on the occasion of inauguration the industrialist announced that he will spend one night in this mall with the board of directors of the mall to stop to prove to the public that this place is not haunted. But the Group of Industrialist was not alone in the mall that nite but the daughter of Industrialist Ahana (Nushrat Bharucha) and her friends also joined the group. The movie goes on and the three of them meet in the mall and struggled really hard to escape from that place and found that the past of individuals is encountered with the activities in that haunted Mall.